Omavalli Bajji / Karpooravalli Bajji / Ajwain Leaf Bajji is one of the yumm snacks that can be had on a rainy day with chai. The flavour of Ajwain Leaf with the deep fried besan batter pairs well and it is simply tasty. I served this ajwain pakoda with Mint Chutney. Yes that is our next recipe….. 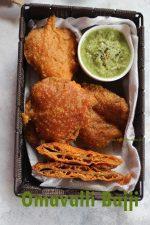 3. Add in water and mix it into a thick paste.

4. Clean the leaves and pat them dry. Dip the leaves one by one in batter.

Take the bajji out of oil and leave it in an absorbent paper for the excess oil to be removed.

That is how it looks in the inside