Coconut milk Pulao / Coconut Pulao is a fragrant, mild pulao. It is a simple and flavoral dish. As coconut milk is the main ingredient it is yummy and tasty. There are so many versions of pulao with coconut milk the one that i have shared here is the basic one where rice is cooked in coconut milk and with spices, Yumm and tasty. This is one of the recipes that is easy and quick to prepare. Click here to check other Pulao recipes. 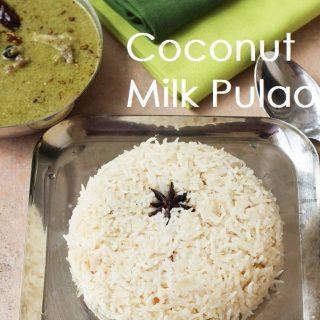 Step by step photos on how to make Plain Coconut Milk Pulao:

2. Add in sliced onion and salt to taste. Saute until glossy. Add in Ginger Garlic paste and saute for few seconds.

3. Drain the water from the rice and add in the rice. Mix gently. Add in salt to taste.