Pomegranate Sago Gulaman / Pomegranate Sago Jelly dessert is a Filipino dessert. It tastes best when it is served chill. It is Generally made with Mango fruit. I made a slight twist and made it with Pomegranate. Gulaman generally has Jelly chunks and/or sago and fruit chunks. This a simply delicious dessert. 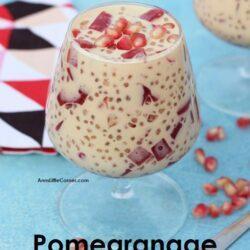 2. Strain the juice in a colander

3. Extract the Juice and discard the waste.

4. Add in Pink food color and mix it to get nice pinkish color. This step is completely optional.

5. Add in Sugar. Stir until the sugar dissolves completely.

6. Add the juice into the sauce pan and start heating in low flame. Add in Jelly powder.

7. Mix under the powder is dissolved. Bring it to boil and switch off the flame. Cool down for few minutes.

8. Pour the Pomegranate mixture into the Mould. Leave it in refridgerator for 2 hours.

9. When it is set take out of refrigerator. Release the edges with a knife. Invert in a plate.

10. Chop into smaller pieces. Set it aside.

11. Heat water in a wok and bring it to boil. Add in Sago. Cook until sago gets soft.

12. Drain the excess water. Set the sago aside.

13. Take boiled and chilled milk in a mixing bowl. Add in Condensed milk and mix them.

14. Add in the Pomegranate jelly and the pomegranate seeds.