Drumstick Soup / Murungaikai Soup is nutritious and Tasty soup. Drumstick and Garlic Combined together forms a delicious soup. Drumstick is rich in iron and many other nutrition and hence this soup is filled with nutrition. This soup is well suited to have on a rainy day evening to substitute tea or coffee. 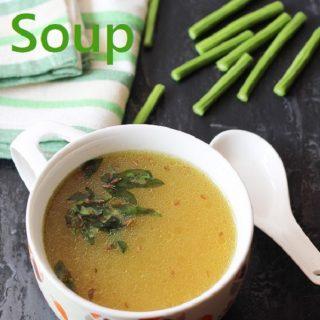 Step by step photos on how to make Drumstick Soup / Murungaikai Soup:

5. Transfer the contents to a bowl and mash the drumstick.

6. Drain the liquid and discard the skin.

7. For Tampering Heat oil in a wok. Add in cumin seeds and allow them to splutter.

8. Add in curry leaves and saute them. Add in the drumstick juice. Bring it to boil. Add salt to taste.