Adai Javvarisi Payasam is popular dessert served during festivals or functions. There are many versions of Adai Payasam. I have Pal Ada Payasam and Ada Pradhamam in my space. These are Payasam/Kheer recipes based out of Adai. Adai and Sago are cooked with Jaggery syrup and Coconut Milk. Finally tampered with ghee that gives out delicious and flavourful dessert 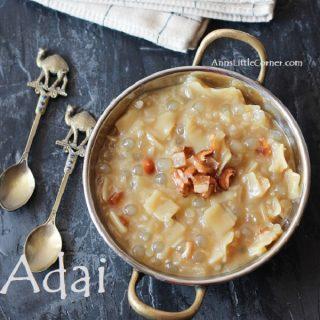 Step by step photos on how to make Adai Javvarisi Payasam:

2. Add in adai and cook them soft.

3. When they are soft enough drain the excess water and set them aside.

4. Heat water in another saucepan and bring it to boil.

6. Drain the excess water and set them aside.

7. Add jaggery and water into a saucepan and start heating. Keep heating until all the jaggery melts.

8. Drain the Jaggery water to remove any impuritues.

11. Add in Cooked sago and cook for few minutes for the jaggey water to blend well.

12. When the Jaggery water has blended well add in the first coconut milk and cook them.

13. Add in the second coconut milk and cook until all the mixture blends well and it thickens.

14. Add in the first coconut milk. Mix them and cook for few minutes.

16. Add in Cashew and coconut chunks.

17. Saute until golden brown. Add the Ghee Mixture into the kheer.